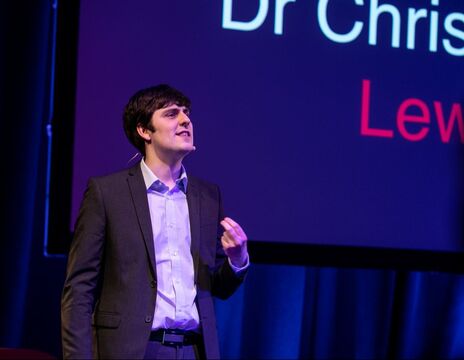 ​Christopher D. Lewis is a senior university academic and recording artist for Naxos Records - the world's largest independent classical music label. An experienced academic, he has proven experience at delivering high levels of H.E teaching across a range of performing arts areas and proven skills relating to leadership, organisation, and administration across both the arts and H.E. industries. As a recording artist he has released an international series of critically acclaimed orchestral and solo recordings of contemporary music for the harpsichord, described by Gramophone Magazine as ‘pioneering’.

His academic teaching covers a range of music and performing arts disciplines. An area of academic focus is in supporting H.E. students in developing professional career related skills. This is demonstrated through a range of developed initiatives in building careers skill development and careers guidance into the taught Performing Arts H.E. curriculum. Recent work has been centred around strategies relating to widening participation and inclusion within Performing Arts H.E. courses developed during his Postgraduate Certificate in Teaching and Learning in Higher Education work. Dr Lewis’s doctoral work was funded by the Arts and Humanities Research Council and the National Trust and focused on the revival of the harpsichord in twentieth-century Britain. He has been a Senior Lecturer in Music at the University of Chester since 2018 and delivers taught courses across the department of Music Media and Performance along with serving as external examiner along with serving as an external examiner to both the University of Chichester and Trinity Laban Conservatoire of Music and Dance. He is a speech writer and Public Orator for the University of Chester and has written and delivered encomia for luminaries such as Professor Dame Sally Davies (Chief Medical Officer for England), Sir Stephen Hough CBE (pianist), and Baroness Floella Benjamin (television presenter). Broadcaster Gyles Brandreth has described Lewis's oration skills as "pitch-perfect in tone, content & delivery".

As a harpsichordist, his discography with Naxos Records features both solo and orchestral modern works for the harpsichord, including music by Philip Glass, Vincent Persichetti, John Rutter, and Francis Poulenc. In 2019 he presented a TED talk titled 'What does the Future hold for Classical Music?', where he outlined an optimistic digital future for the music industries.
​
Professional affiliations include as a Ted Speaker, a Fellow of the Royal Society of Arts, the Higher Education Authority, National College of Music & Arts and an Honorary Fellow of The Guild of Musicians & Singers. Academic qualifications include a Bachelor of Music Research (B.Mus) from McGill University (Montréal, Canada), a Master of Music Performance (MM) from the San Francisco Conservatory of Music, a Postgraduate Certificate in Teaching and Learning in Higher Education (PGCHE) from the University of Chester, and a Ph.D. in Musicology & Performance from the University of Southampton.